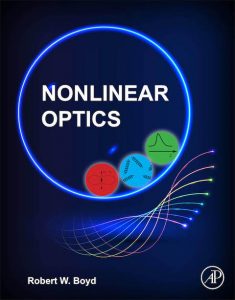 The total number of copies sold to date is in excess of 15,000, and according to Google Scholar the book has been cited 18,066 times.

Here are some details regarding this edition:

The book is available from Amazon or from the publisher at https://www.elsevier.com/books/nonlinear-optics/boyd/978-0-12-811002-7

Table of Contents and Preface to the Fourth Edition

Table of Contents and Preface

Errata for the current (fourth) edition

Overall Comment: Gaussian is sometime written as Gaussian and sometimes as gaussian. Both spellings seem to be in use, although I think that Gaussian is generally accepted as the preferred form. We should change all occurrences of the word as Gaussian.

Page 59, Eq. (1.7.9b). The omega in front of integral should be replaced by omega’ and placed inside the integral.

Page 84, the un-numbered equation three lines down from Eq. (3.5.2). The quantity n_i on the right-hand side of the equation should be replaced by n_1

Page 124, Figure 2.12.4, last sentence of caption should read: This situation is most desirable because walk-off is eliminated for θ = 90◦, and in addition the phase mismatch scales only quadratically with $ \delta \theta$.

Page 184, Eq. (3.4.5), second line of the equation, the quantity E_m just before the closing parenthesis. The quantity E_m should be replaced by E_{\nu}

Page 554, sentence immediately before Eq. (13.5.7), please insert the word “by” in the phrase “In the reference frame moving with the uniform translational velocity, the electron motion can be described [by] the equations”

Page 559, last line on the page should read “and tunneling ionization dominates for γK < 1.” That is, change greater than symbol to less than symbol

Page 560, Eq. (13.7.2). Change |omega to \omega_L in the center expression and omit the subscript r on the m_r in the right-most expression. Also, add a comma after this expression and add the following text to the next line: where tau represents the tunneling time though the barrier.

Page 562, ninth line from the top. Replace charged particles with polarizable particles and delete the words “such as electrons.”

Page 565, first line, immediately after the in-line equation please add: “for light of vacuum wavelength \lambda”. Also, the symbol lambda-bar_C appears four times in this paragraph. Change the subscript to Roman capital C in all cases.

Page 578, the two lines immediately above Eq. (14.5.11). The fragment “form is” at the beginning of this paragraph should be omitted. Also, the first occurrence of the word “by” should be omitted and the words “are given” should be replaced by “is given” so that the text reads: “One similarly finds that the component of the propagation vector perpendicular to the interface is given in each of the two media by”